In order to protect Missouri’s deer herd, Hunters for Fair Chase filed initiative petitions to end the unnatural practice of transporting live big game in Missouri.  These shipments are a known risk factor in the spread of disease into free-ranging wildlife.  Chronic Wasting Disease in particular poses a long term threat to the health of wild deer.

The Confined big game killing industry depends on these shipments to supply people willing to pay to shoot animals confined behind high fences.

Signature gathering has been suspended. For more information see our announcement.

It appears now that the Commission has clear authority to regulate all cervid species in the state whether wild or confined.  If that authority survives and the Commission acts as needed,  it should not be necessary to pursue a future initiative petition on the topic.  HFFC is paying careful attention to how this plays out.  If it appears a future initiative petition becomes necessary we will consult with our supporting organizations to consider re-starting the effort for a future ballot measure.

“Hunters for Fair Chase” has filed initiative petitions to protect the health of Misosuri’s wild free-ranging big game by ending the transportation of live big game.  Also to ensure the Missouri Conservation Commission has primary regulatory authority over confined big game.  Here is a summary:

“Hunters For Fair Chase”, a citizen-led campaign committee formed by Missouri hunters and landowners, supported by several national and state conservation organizations, wants Missouri voters to eliminate a key threat to the future of wild deer in Missouri. HFFC has filed an initiative petition putting the matter to a statewide vote in November 2018.

The amendment seeks to promote healthy wild deer for future generations by reducing the risk of new outbreaks of Chronic Wasting Disease . The transportation of live big game is a known risk factor for spreading this dangerous illness. The confined cervid industry, which includes the sale of opportunities to shoot deer and elk held behind high fences, is heavily involved in trafficking live big game such as deer and elk. 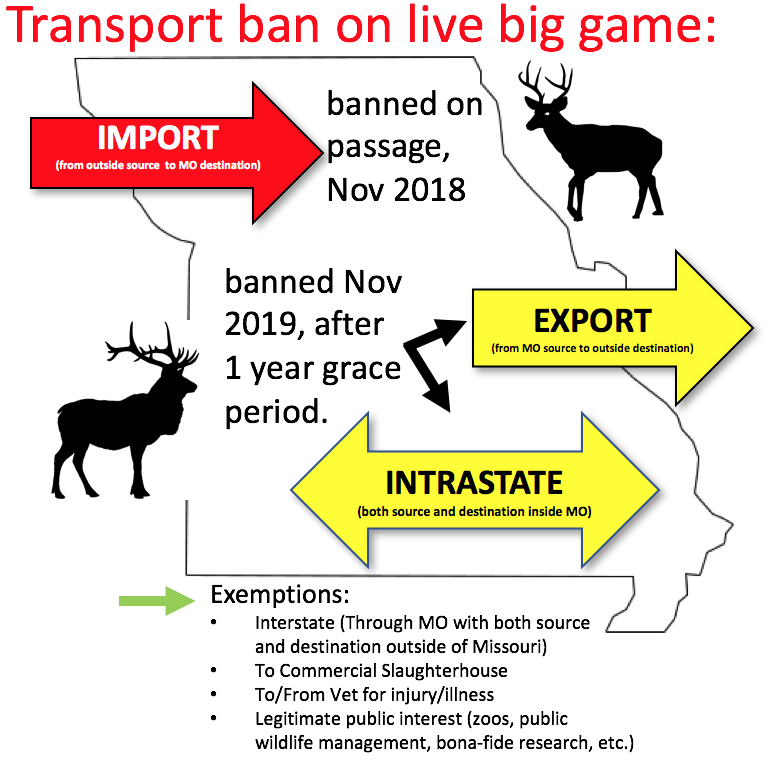 The amendment seeks the following changes:

The petition language can be read here (HuntersForFairChase.com/ballot)